Look up, Conroe! Do you see that? It’s a bird…It’s a plane…It’s a…well yes, it sure is a plane and chances are it’s taking off from or landing at the Lone Star Executive Airport (CXO). A 1,501 ft. runway extension, bringing the runway length to a total of 7,501 ft., will increase flights and enhance the Conroe economy.

To help us understand the runway extension and the impact it will have, we went to the experts. The main expert, Scott Smith, Director of the Lone Star Executive Airport, provided details and an explanation for the extension project. “The extension will eliminate summertime takeoff weight limitations, while also improving safety by providing longer available runway length,” Smith said. Smith also noted that a runway extension was not a new idea, but was pushed along by growth. “The extension has been in the master plan since 1985. We confirmed through observation that the extension was needed now.”

Economic development is not only a cause for the extension; it will also be positively affected by the project. “Companies that may not have seen Lone Star Executive Airport as a viable option in the past, due to runway length, can now eliminate that concern,” says Smith. “An extended runway here makes Conroe that much easier to get to for businesses wanting to head this way.”

As Smith explained, the runway extension is not all the airport is doing to attract business executives. A brand new U.S. Customs & Border Protection Federal Inspection Service is slated to open in 2016. This will allow inbound private aircrafts to clear customs at CXO instead of stopping elsewhere before reaching Conroe. Lone Star Executive Airport will join George Bush Intercontinental Airport as the only local airports north of downtown Houston with a customs service.

As Lone Star Executive Airport proves itself as an economic engine, Smith recognizes the Greater Conroe Economic Development Council (GCEDC) as a big partner in the airport’s success. “The GCEDC has been very supportive of what we are doing here,” according to Smith. “They understand and promote great synergy between the airport and local economic development.”

GCEDC Executive Director, Fred Welch, echoes the words of Smith. “The airport expansions create a nexus of opportunity located in one place, north of Houston, making it a job and revenue creator for Conroe and Montgomery County,” says Welch. “Lone Star Executive Airport puts Montgomery County squarely in position to be aggressive in corporate and general aviation.”

Smith also praised the Montgomery County Commissioner’s Court, the City of Conroe, including the Mayor, City Council, and Conroe Industrial Development Corporation, and the Texas Department of Transportation’s Aviation Division for their support of the runway extension and airport, in general. “Without political will, the necessary changes at the airport cannot happen,” added Smith.

As the number of planes that land at Lone Star Executive Airport continue to grow, so will the Conroe economy. Businesses see now, more than ever, Conroe is ready to do business. With that, make sure your seatbelts are securely fastened and your seat backs and tray tables are in their full upright position. Conroe is taking off. 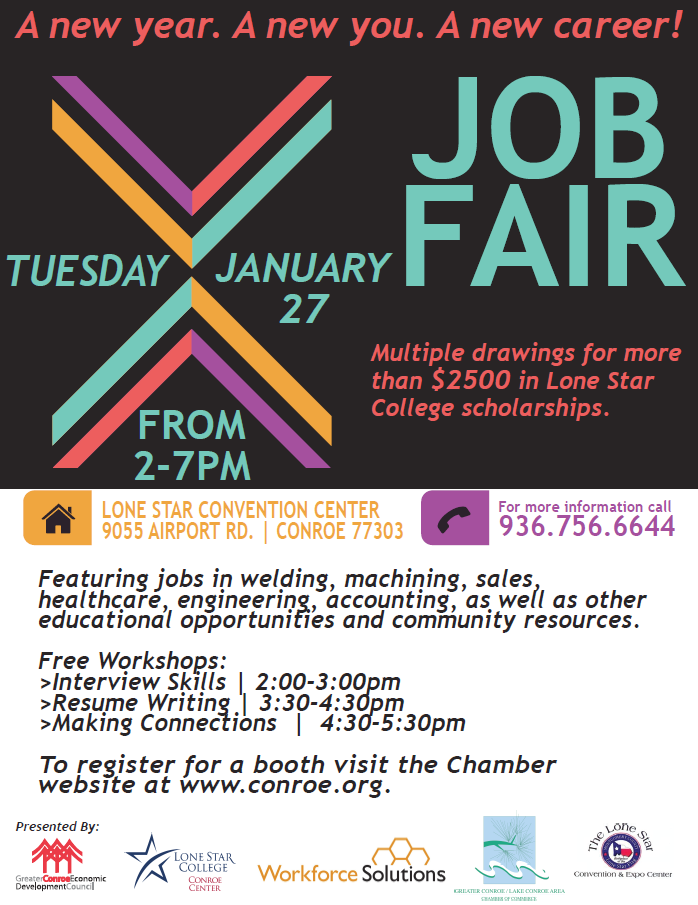 Jan 14 2015
A new year. A new You. A new career! Save the Date – Tuesday, January 27 At the Lone Star Convention Center – 9055 Airport Road, Conroe Featuring jobs in welding, machining, sales, healthcare, engineering, account, as well as other educational opportunities and community resources.  Free workshops will be available.  For more information...Continue Reading